Mammals and birds invest in sons or daughters and many turtles can develop as male or female depending on incubation temperature. These topics are united by the theory of sex allocation, which predicts allocation of resources to male or female function (e.g. sons or daughters) that depends on individual and environmental conditions. Sex allocation theory has a rich history in evolutionary biology and has been called “a touchstone in the study of adaptation” (Frank 1985) due to its success in predicting sex ratio patterns and revealing the operation of frequency-dependent selection on sex. Success of sex allocation theory has been more limited, however, in mammals and other animals with complex life histories. This simultaneously raises challenges and opportunities. My goal is to unravel the confusing patterns of sex allocation in these animals by expanding theory and empiricism to account for life history complexity.

Overlapping generations in mammals per se do not change the fact that what is most important to sex allocation is how offspring lifetime fitness changes as a function of maternal or environmental traits. For example, if sons gain more than daughters from being produced by mothers in good condition (e.g. due to higher reproductive skew in males compared to females), mothers will gain more fitness returns for increased investment in sons and should be selected to produce sons when in good condition and daughters when in poor condition. However, overlapping generations can complicate the response. Notably, we’ve shown that maternal condition may average over several years, rather than being entirely relative to other mothers in the current year. Additionally, competition between a mother and her daughters may obscure this pattern (e.g. see Wild and West 2007)  or mothers may trade-off between current and future reproduction. My continued research in the theory of sex allocation aims to incorporate complex life histories in the theoretical development to determine how these factors may influence patterns expected in mammals.

Much of my empirical work on sex allocation in mammals has focused to date on tammar wallabies. With my collaborator Kylie Robert, I have been examining the evolutionary and physiological explanations of sex allocation in this species at a field site in Western Australia and in captive populations. Our studies have examined how the sex of the pouch young correlates with the levels of stress hormones and glucose of mothers. Gaining a better understanding of the physiological mechanisms underlying manipulation of offspring sex ratio would provide insight into the links between environment and sex ratio, and hopefully reveal when and why the environment is important for sex-specific offspring fitness. 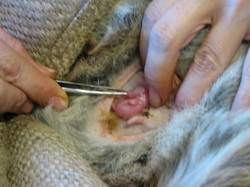 One of the most challenging aspects of studying sex allocation is the complications of manipulating sex. An ideal experiment would manipulate the sex of an offspring that a mother produces and determine the fitness consequences. We have been conducting such experiments through cross-fostering of pouch young early during lactation. At this time, the mother has provided little energetic investment into the offspring, thus any interactions between offspring sex, maternal investment and post-weaning environment can be revealed. One important finding of this research has been that sons do not suffer more than daughters by being reared by a mother of poor condition. This disproves a common non-adaptive hypothesis of mammalian sex allocation that suggests that sons of mothers in poor condition die, inadvertently leading to a recorded pattern between maternal condition and offspring sex ratio. In addition, we have found effects of reared offspring sex on future maternal reproduction, suggesting that the direct impacts of offspring sex on maternal fitness may be greater than previously appreciated.

My research in this area continues to explore reproductive ecology of tammar wallabies. I aim to expand my empirical work to include other mammals, particularly marsupials, which may provide better study systems of mammalian sex allocation compared to placental mammals.