Why is it that sex (male or female) is determined according to the complement of sex chromosomes in some animals (Genotypic Sex Determination, GSD), whereas temperature early in life largely determines sex in other animals (Temperature-dependent Sex Determination, TSD)? Is the difference due to different selective environments? How are temperature and sexual outcome linked mechanistically? Does the mode of sex determination influence population traits, such as growth rates or the sex ratio, particularly when thinking about animals in changing climates? These are questions I address by developing theoretical predictions, analyzing long-term data and collecting new data. Approaching the puzzle of sex determination from varied angles, including genetic, physiological and functional, provides a holistic view and often leads to unforeseen insight that crosses disciplines.

Charnov and Bull (1977) proposed that TSD evolves when individual fitness depends on temperature, but that this dependence differs between sexes. For example, females may gain more in lifetime fitness by developing in warmer temperatures compared to cooler temperatures than do males (say, if warmer temperatures lead to greater adult body size, which has a greater effect on female fecundity than male fertility). If this were true, natural selection would favor individuals that develop as females in warm temperatures and males in cool temperatures. This happens to be a common pattern of TSD in reptiles, particularly in turtles. Testing this hypothesis is extremely difficult given the challenges of measuring lifetime fitness in animals as long-lived as turtles and manipulating sex. 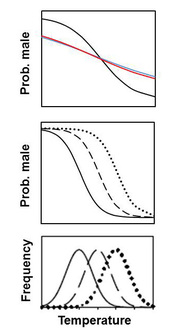 To explore the evolutionary explanations of TSD, I examine the functional ecology of the relationship between sex and temperature. This has often involved the development of theoretical models. For example, living in fluctuating environments (left, bottom panel) can cause TSD-exhibiting species to produce highly biased sex ratios in a single year. This leads to strong frequency-dependent selection for the rare sex. Myself and collaborators Steve Proulx and Fred Janzen have shown that this selects for traits that minimize sex ratio biases: 1) the loss of TSD and return to GSD (top panel) or 2) plasticity  in response to the environment (middle panel). We’ve also shown that the importance of temperature for sex determination (i.e. the “degree” of TSD) can be captured with a single metric borrowed from information theory, mutual information.

I am continuing to examine the theoretical evolution of TSD and GSD by expanding a recent model by Quinn et al. (2011) that posits a generalized model of genetic AND temperature effects on sex determination. This underlying system could be conserved across vertebrates in its generalized form, yet modified simply to produce TSD or GSD. Through theoretical exploration, I continue to address the evolutionary lability, selective forces and functional form of TSD.

What does it mean for real animals? 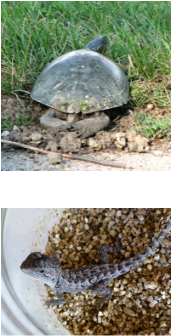 Testing theoretical predictions about the evolution of TSD and its impacts on populations requires empirical data. One of my major empirical approaches involves leveraging a long-term data set of painted turtles (Chrysemys picta) collected through many yeas of hard work by my collaborator, Fred Janzen, and his annual lab effort at “Turtle Camp”. Painted turtles demonstrate a great deal of plasticity in TSD-related traits in response to climate. In warmer years, females nest earlier, lay shadier nests and produce clutches that require a warmer temperature to produce a biased sex ratio. These responses to climate, however, are not sufficient to prevent biased sex ratios. All male hatchlings are produced in cool years and a female-biased sex ratio is produced in warm years. What does this mean for population stability and growth, particularly under climate change? Continued research in this area examines aspects of maternal nesting behavior, effects of maternal age and behavior on fitness and the relative importance of nest predation, nesting behavior and climate on individuals and populations.


Funded by an Australian Research Council DECRA Fellowship, I am currently examining the role of temperature, climate and genetics on nesting behavior and sex ratios in the Australian Agamid lizards. In addition to focusing on a captive population of Canberran Jacky dragons (Amphibolurus muricatus), I am expanding to inter-population and inter-specific studies.

How does TSD work mechanistically?

Temperature inside a turtle nest over a month ( F. Janzen)
Developing vertebrate embryos commit to being male or female at a certain point during embryonic development. In animals with TSD, incubation temperature can affect the sexual outcome of an embryo only during a thermosensitive period (TSP) during the middle third of embryonic development. This is likely a complex process involving a genetic network of sexual differentiation. Can this complex process be understood in a simplified form that allows predictive ability of embryonic sex? If so, we would simultaneously 1) gain insight into the developmental process of sexual differentiation in vertebrates and 2) improve our ability to predict embryonic sex without damaging an embryo.