Most North American ground squirrels of the genus Spermophilus have strongly season patterns of reproduction and behavior that are largely driven by the long, cold winters and short growing seasons typical of northern U.S.A. and Canada. Males and females emerge from hibernation early in the spring and mate immediately following emergence, so that lactation of the litter coincides with peak spring precipitation and resource availability. Adult males and females pack on body fat throughout the summer and disappear back underground for hibernation by late summer.

But what about Spermophilus species that live in warmer, more southernly climates? In the southwestern United States, peak precipitation occurs not in spring, but in the winter or summer (or both). Winters are typically less severe than at higher latitudes and summers can be extremely hot. I examined the annual patterns of a desert-dwelling ground squirrel, the Mexican ground squirrel (Spermophilus mexicanus), that lives in the Chihuahuan desert of southwest U.S.A. and northern Mexico. I found that adult males and females still hibernate, although the temporal duration (roughly September to March) is less than in many other ground squirrel species. Mating does not occur for a month or two after emergence from hibernation, with lactation and litter weaning coinciding with summer rains in the late summer (July). Thus, my research into this unusual north American ground squirrel demonstrates the importance of the timing of resource availability for reproduction and annual patterns of behavior. 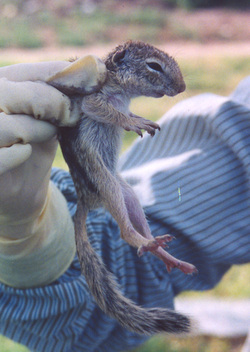